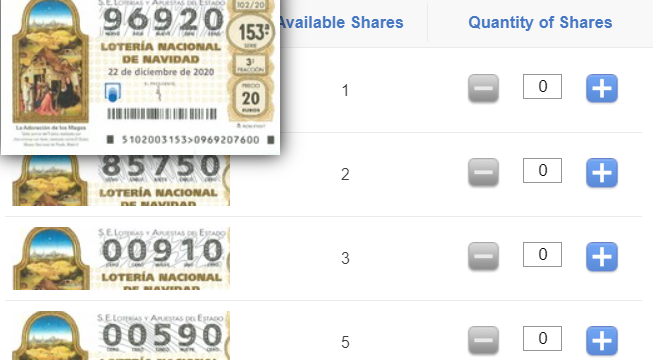 The jackpot of the world’s biggest lottery El Gordo fell on 21 December 2020, just before Christmas. During the announcement of the winning lottery numbers, the jackpot fell just after noon. Anyone with a winning ticket can add 4 million euros to their account. Every year the Spanish El Gordo lottery organises this special Christmas draw.

However, because of corona, this year’s lottery sold fewer tickets, 11 percent less. This is the first time in six years. The El Gordo tickets have been available since August and cost 20 euros for a tenth ticket.

On 22 December, the El Gordo lottery is traditionally drawn. Television station RTVE broadcasts the draw live from the Teatro Real in the capital Madrid. The draw is hugely popular, watched by millions of people in Spain and abroad every year.

This year’s El Gordo jackpot was worth €4 million per ticket. The winning lottery numbers are traditionally sung by children during the draw. In addition to the jackpot, second-placed lottery tickets won €1.25 million and third-placed lottery tickets were worth half a million. In total, 2.4 billion euros worth of prizes were distributed this year, 28 million euros more than last year.

The winning lottery number for this year’s jackpot was 72897. With this lottery number, many different players in different cities won. For example, lottery tickets with this number were bought in big cities such as Madrid, Granada, Alicante and Valencia, but also in lesser known places such as Cáceras, Tarragona and Huelva.

In any case, the company will have a new owner as of July 1, 2021. Esports Entertainment Group will pay €16 million in advance to former owner Gameday Group plc for the acquisition of Bethard. In addition, they will pay an earn-out based on 15% of …

END_OF_DOCUMENT_TOKEN_TO_BE_REPLACED

Eurojackpot is one of the most famous lotteries in Europe. Almost every gambling enthusiast knows it. Interestingly enough, Eurojackpot is just a few years old. It was established in March 2012. Soon many countries decided to participate in this …